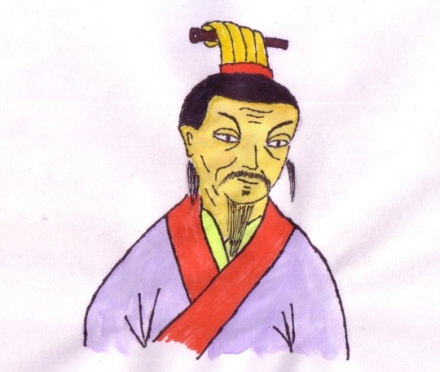 To interpret this historical event properly, we must trace back to its origin. In the beginning, King Wu-gong of the State of Zheng 2 married a woman, Wu-jiang, from the State of Shen 3. She gave birth to Zhuang-gong and then Duan, who later became the Uncle of the State of Gong. When Zhuang-gong was born, his feet came out first. This scared Wu-jiang, so she disliked him and called him Wu-sheng 4. She gave all her love to Duan and wanted him to be the king’s heir. She repeatedly asked the king to consider this, but he did not approve.

After Zhuang-gong inherited the throne, Wu-jiang asked him to give Duan control over Zhi City 5. King Zhuang-gong said, “Zhi City is an invincible mountain fortress. Duke Shu Guo 6 was executed because he thought that by occupying the city he could avoid punishment despite his evil deeds. I will grant your request if you ask for any city other than Zhi City.” So Wu-jiang asked for Jing City 7 instead. Then King Zhuang-gong summoned Duan to the court and granted him the city. From then on, Duan was called the Great Uncle of Jing City.

Adviser Zhong Zhai 8 told King Zhuang-gong, “If a city’s diameter exceeds thirty miles, it is detrimental to the country. According to the law of great kings, a big city’s diameter cannot exceed one third of the capital’s diameter; a medium size city’s cannot exceed one fifth; a small city’s cannot exceed one ninth. Now Jing City is too large to meet this standard. Giving your brother control of Jing City will cause you a lot of trouble later.” “My mother wanted me to do it. How can I avoid this trouble?” asked the king. Zhong Zhai replied, “Your mother’s greed will never end. You should stop it early so that it will not spread out of control like weeds. Overgrown weeds are difficult to eliminate. Subduing your favored brother will be an even more difficult task.” The king said, “I believe one who frequently commits evil deeds will destroy oneself. Please wait for a while.”

Later, the Great Uncle ordered the western and northern neighboring towns to pay taxes to him. Official LÃ¼ 9 told King Zhuang-gong, “People cannot endure the burden of double taxes. What do you plan to do? If you want to abdicate the throne to the Great Uncle, let me go work for him. If you want to remain king, then please get rid of him. Otherwise, people may support him as their king.” King Zhuang-gong said, “It is not necessary. Duan will suffer the consequences.”

A short while later, the Great Uncle decided that the taxes from the two neighboring towns were no longer sufficient, so he gained control of the two towns and Lin-yan City. General Zi-feng suggested, “It is time to reduce the Great Uncle’s power. Otherwise, it will grow so formidable that people may consider him the king.” King Zhuang-gong said, “Duan is neither loyal to his king nor friendly to his brother. The more his power grows, the faster he will fail.”

The Great Uncle stored food supplies and built a tall wall around Jing City. He also built a strong cavalry force equipped with chariots, and planned to attack the State of Zheng. Wu-jiang agreed to open the capital’s gate for Duan. After learning the date of Duan’s attack, King Zhuang-gong said, “Now it is time to crush Duan’s troops.” Consequently, the king ordered General Zi-feng to lead 200 chariots to seize Jing City. The people in Jing City betrayed the Great Uncle, causing his troops to withdraw to Yan City. So King Zhuang-gong attacked Yan City, and on May 20th the Great Uncle fled to the State of Gong.

After the war, the king put Wu-jiang under house arrest in Ying City and swore, “We shall not see each other until I reach yellow water underground 10.” Later, he regretted his decision. After Uncle Ying-kao, a general in charge of defending Ying City, heard the story, he presented some gifts to the king. In return, King Zhuang-gong treated him to a gourmet dinner. Uncle Ying-kao saved the beef stew. The king asked him why. Uncle Ying-kao said, “Out of respect for my mother, I share all my food with her. However, she has never tasted your beef stew. Please allow me to take it home to my mother.” The king sighed, “You have a mother with whom to share food. I, however, do not have a mother.” Uncle Ying-kao asked, “May I know why?” The king explained it to him and expressed his regret. Uncle Ying-kao said, “There is nothing to worry about. If you dig a tunnel deep enough to reach water and then meet your mother in the tunnel, who can say that you have violated your oath?” King Zhuang-gong followed his advice.

Gentlemen said, “Uncle Ying-kao is a kind man who loves his mother and shares the joy of love with the king.” The Book of Poetry says, “The heart of a caring son is so powerful that it moves others to love their parents.” Perhaps the character of the son refers to a man such as Uncle Ying-kao.

8 Zhong Zhai was a member of the extended royal family. He used the name of the city where he lived as his surname.

9 Zi-feng was Official LÃ¼’s first name. He was a member of the extended royal family.