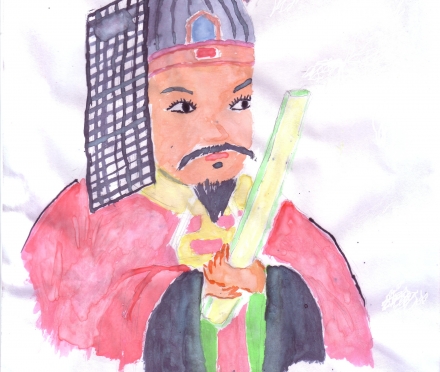 Zhong-yan Fan was a native of Su City 2. He always strove to help others, especially impoverished relatives and talented strangers. When he became a high official, he purchased a thousand acres of good cropland adjacent to the city. This land was called the Virtuous Cropland. He used the bounty of this land to provide for his extended family and pay for their weddings, funerals, and special needs. He selected the oldest and wisest in the family to take charge of the fund by receiving and disbursing money at appropriate times. Each person was provided a liter of rice daily and a bolt of silk yearly. Any male relative who gave away his daughter was given $5,000. If his daughter was to be remarried, he was given $3,000. A man who was about to get married was given $3,000. If he was to be remarried, he was given $1,500. Anyone who buried his close relative was also given $1,500. If a child died, the parents were given $1,000. There were a total of 90 people in Fan’s extended family. The Virtuous Cropland produced 800 bushels of grain per year. This income was sufficient for amply supplying the entire family. Those who were unemployed and looking for jobs were given assistance. Those who held official posts were not. The above description provides a general impression of the Virtuous Cropland.

Fan had harbored this dream for 20 years, but during his youth he had not had the financial ability to realize it. Later, he became the western field marshal 3 and then administered state affairs 4. Afterwards, he had a generous income from his salary and was able to fulfill his dream. After Fan died, his offspring continued to manage the enterprise of the Virtuous Cropland and carried on his legacy as if he were alive. Although Fan had a high position and handsome salary, he chose to live frugally all his life and gave his money away to help others. When he died, his children could not afford his coffin or funeral. Only his legacy of philanthropy was handed down to his offspring.

During the Warring States Period, the Prime Minister of the State of Qi, Ping-zhong Yan, rode an antiquated carriage drawn by nags. Huan-zi said, “Yan conceals the King’s generosity.” Yan said, “Since I became the prime minister, all of my father’s family have been able to ride carriages. All of my mother’s family have had enough food and clothing. All of my wife’s family have been able to stay warm and avoid hunger. In fact, 300 people in Qi are able to make a fire to cook because I employ them. So, am I concealing or am I revealing the king’s generosity?” Consequently, the King of Qi ordered Huan-zi to drink wine with Yan’s cup as a punishment for his improper accusation. I appreciate that Yan loved virtue, that the King of Qi employed the skilled and talented, and that Huan-zi submitted to the truth. I also appreciate that Yan assisted people according to their degree of relation to him and that his speech showed respect for that hierarchy. He helped his father’s family first, then his mother’s family, his wife’s family, and finally talented strangers. Mencius said, “Only if one loves his family can one love other people. Only if one loves people first can one love other living beings.” It can be said that Yan was such a person. In view of the design of the Virtuous Cropland, Fan was wiser than Yan. In terms of the scope of the enterprise and the time span of his legacy, Fan seemed to surpass Yan.

Alas! For those who hold the title of Duke and enjoy a handsome salary, the magnificence of their mansions, the decoration of their carriages and sedan chairs, the excess of their sensual pleasures, and the affluence of their wives and children are only limited to their immediate families. There are many members of their extended families, not to mention talented strangers, who cannot even find a way to enter their homes. Next, for those who hold the titles of Count, Baron, or Knight, their high-paying salaries and luxurious habits are only limited to themselves. There many members of their extended families who panhandle on the streets and then die in ditches from starvation. I need not mention that they will not consider helping strangers. Compared to Fan, these high-ranking officials are like criminals. Fan’s integrity spread over the emperor’s court; his contributions spread over China’s borders; his great reputation spread over the entire nation. There will surely be some future historians who will write about Fan’s accomplishments; it is unnecessary for me to record them here. I write this essay to pass his legacy on to future generations simply because I admire Fan’s virtue.

1 Jun-yi was Gong-fu Qian’s other first name. He was a native of Wu-jin City during the Song dynasty. After passing the Advanced Exam, Qian was appointed to update literary and historical books, and then to draft the emperor’s edicts. After Emperor Ying-zong inherited the throne, Zhi-ping Chen proposed that Chou Wang be promoted to the Vice President of the Privy Council. Qian refused to draft the edict of appointment. Consequently, he suffered a demotion. When Emperor Shen-zong inherited the throne, Qian was reappointed to revise books. Because he offended An-shi Wang, the prime minister, he was demoted to Mayor of Jiang-ning-fu City. After he was transferred to Yang-zhou City, Qian was promoted to an official of the emperor’s court. Soon after he died.

2 Su City is now called Wu-xian City which is located in Jiangsu Province.

3 In 1043, King Yuan-hao Zhao of the Kingdom of Western Xia secretly rebelled, Zhong-yan Fan was appointed to be the Pacification and Comforting Commissioner of the Western Route in Shaanxi Province. His duty was to persuade Zhao to surrender.

4 Later, Fan was appointed to be the Vice President of the Privy Council. Soon after he was reappointed to administer state affairs.