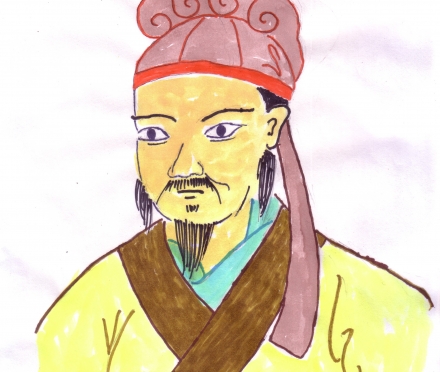 There is a winding valley south of Tai-hang Mountain. In the valley, there are rich soils, luxuriant vegetation, and sweet spring water, but few inhabitants. Some say, “The valley winds between two mountains, so it is called the Winding Valley.” Others say, “The secluded location and difficult passage invites hermits to meander around this valley.” My friend Yuan Li lived there.

Yuan said, “I have witnessed the life of a dignitary. He is the one who does favors for others and is celebrated during his time. While he sits in the emperor’s court, he appoints and dismisses officials, and assists the emperor in giving orders. When he goes out, his entourage displays splendid flags and various weapons to flaunt his importance. His guards lead the way with his followers crowding behind, blocking traffic. Servants provide the dignitary with supplies and services. They line both sides of the road and speed along with his errands. If the dignitary is happy, he will reward them. If he is angry, he will punish them. Talented people congregate around him and praise his greatness by comparing him to historical figures. He never tires of listening to these stories. His wives have arched eyebrows and rosy cheeks. They wear white powder and paint their eyelids green. They are beautiful outside and brilliant inside. Their voices are clear and melodious, and their footsteps seem weightless. While they walk, their sleeves and the trains of their garments flow behind them. They live lives of leisure in fancy chambers. Some are jealous; others are secure. They compete to win their master’s love with beauty and delicacy. This is the life of a person who assumes authority and is regarded highly by the emperor.

“I have no objection to a life of high rank and would not try to escape from it if given the opportunity. It is my fate that I cannot enjoy such a fortunate life. I live simply in the wild and climb mountains to look into the distance. I love to sit under a luxurious tree all day and then take a bath in a limpid spring. The wild vegetables I gather in the mountains are delicious. The fish caught from the water are fresh. My daily life has no set schedule. I do whatever pleases me. I would rather be found blameless by future generations than be honored by people around me. I would rather be free from worry than enjoy sensual pleasure. If one does not desire a splendid carriage or fancy clothing, he will not be punished for his greed by knife and saw. If one is not involved in politics, his emotions will not be affected by promotions or demotions. This lifestyle suits one who is idealistic but has no chance to realize his dreams. I resolved to pursue this ideal.

“Suppose one serves a high-ranking official at the official’s door, busily running about to follow the trend to worldly success. His feet are going to advance, but he hesitates to move. He wants to speak the truth, but he does not have the courage to do so. By and by he no longer feels shame for being corrupted. Once he violates the law, he may be sentenced to death. However, he still wants to pursue that unattainable wealth and power by any means until he becomes old and dies. It is easy to decide whether or not this kind of life is worth pursuing.”

After listening to Yuan’s words, I admired his decision to return home. Therefore, I toasted him and sang for him, “The Winding Valley is your paradise. You may cultivate its land. Its spring can cleanse and can be enjoyed for its beauty. This valley is difficult to reach. Who would want to take this land from you? The Winding Valley is long and deep. It is so wide that you have plenty of space to live. It is sinuous: it goes one direction and then suddenly turns back. It is a great joy to live in this place. The traces of tigers and leopards are remote; horned dragons have fled and hidden. The patron god protects this land and repels ill omens. The food and drink produced here will give you a long and healthy life. You have everything you need, what else do you desire? Let me prepare my carriage and feed my horses. I would like to follow you to the Winding Valley and live a carefree life.”

1 After Han’s friend Yuan Li was dismissed from his office, Han wrote him this letter.

2 Tui-zi was Yu Han’s other first name. He was a native of Nan-yang City (present day Meng-xian City of Henan Province). His ancestors used to live in Chang-li City (west of present day Xu-shui-xian City in Hebei Province), so he called himself “Yu Han from Chang-li City” When he was three, his parents died. His brother’s wife raised him. He studied hard during his early years and mastered the Six Bibles and various schools of philosophy. In 792 CE, he passed the Advanced Exam. At the peak of his career, he was the Deputy Minister of the Civil Service. He was given the posthumous name “Wen” (literature) by the emperor. While he was the Deputy Minister of the Judicial Department, Emperor De sent an envoy to India to acquire Buddha’s bones. Yu Han wrote the emperor a letter to admonish him for his edict. Emperor De was furious and wanted to put Han to death. Due to Du Pei and others’ rescue effort, Han’s punishment was reduced from death to a demotion to the position of mayor of Chao-zhou City. His reputation of moral courage caused a sensation throughout China. He had great expectations for himself and regarded developing Confucianism as his responsibility. From the Wei and Jin dynasties through the Tang dynasty, Buddhism and Taoism were popular. Yu Han rejected them without regard for his own life. In the early Tang dynasty, writers loved to write essays in poetry form. Han advocated that an essay must have a virtuous theme and tried to revolutionize literature by reverting to an ancient style. He also advocated for replacing the contemporary essays written in poetry form with prose. Han’s views on literature greatly affected the literature of both his contemporaries and later generations. Anthologists of later generations collected the essays of Yu Han, Zong-yuan Liu, Xiu Ou-yang, Gong Zeng, An-shi Wang, Xun Su, Shi Su, and Che Su as exemplary essays for literature students, and called the above eight essayists the Eight Masters of Literature During the Tang and Song dynasties. Yu Han was ranked first.

Dong-po Su commented on Yu Han’s writing: “Chinese literature had been lifeless for eight generations until Han published his essays. Han proposed that an essay must have a virtuous theme. His effort in promoting virtue saved China from drowning in pessimism.”