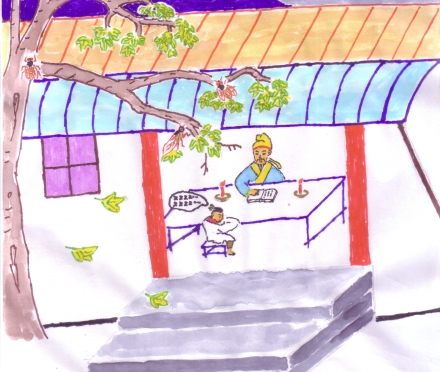 One night while I was reading, a startling sound came from the southwest. I was frightened when I heard it. I said to myself, “This sound is strange.” At first, it was as soft as the drizzle of rain or the rustle of leaves. Suddenly it became loud with the sound of waves crashing. It seemed that the waves were howling in the dark to herald an imminent storm. When Autumn touches something, it sounds like rain hitting a tin roof. The sound was also like soldiers marching forward silently to engage the foe. No verbal commands could be heard except for the rushing of people and horses.

I told my servant boy, “Go out and see where the sound is coming from!” He answered, “The moon and stars are clear and galaxies are bright. There are no people around. The sound comes from trees.”

I said, “How sad it was! This must be the sound of Autumn. How does it happen? Let us describe Autumn first. Its color is dreadfully pale like that of gathered clouds of mist and snow. Its appearance is clean and bright like the shining sun in the lofty sky. Its air current is cold and stings people’s flesh and bones. It desires to turn the landscape bleak and desolate, including the mountains and rivers. Consequently, the sound of Autumn is bitterly sad as if someone were wailing. Before Autumn arrives, grass and bushes compete at growing. Trees are lush, green and lovely. However, after Autumn arrives, the leaves of a tree will fall and grass will change its color. This destruction is due to the excessive killing power of the chill.

“The Autumn Department in the Zhou dynasty 1 was in charge of punishment. This name was chosen because the Autumn season brings destruction to mind. Due to its destructive power, autumn resembles war and corresponds to gold in the five basic elements 2. Thus, Autumn symbolizes the dignified spirit of virtue spanning heaven and earth, which works through extermination. In nature, trees grow in Spring and produce fruit in Autumn. In music, autumn corresponds to the “˜Shang’ tune 3, a common feature of western 4 music. In pitch pipe music, July corresponds to the “˜Yi’ semitone 5. “˜Shang’ means “˜sadness’ in Chinese. It is sad that things grow old. “˜Yi’ means “˜extermination’ in Chinese. The surplus of plants and animals should be eliminated.

“The trees have no emotions, but their leaves are still going to fall. A human is the most sensitive creature. Hundreds of problems occupy his mind. Great labors tire his body. An affliction of his mind will shake his spirit. In addition, he thinks about things that are beyond his ability to understand and worries about problems that he cannot solve. No wonder a young face looks haggard and black hair turns gray. His body is made of flesh and blood rather than gold or stone, but he still likes to compete with flowers for vanity. Given that his mortality results from his own actions, how can he complain about the sound of Autumn?”

My servant boy did not reply. He lowered his head and fell asleep. I only heard cicadas singing aloud in all directions. They seemed to accompany my sigh.

1 The government was divided into six departments during the Zhou dynasty. The Autumn Department was one of them.

We should appreciate Ou-yang’s astute observation and amazing sensitivities which enabled him to obtain a conclusion similar to Darwin’s theory of evolution. Because Ou-yang could not explain his discovery with a scientific argument in his time, it was natural for him to resort to metaphor or mysticism in his explanation. Similarly, it is superficial to classify Homer’s Odyssey as mythology. The correct attitude is to view it as Greek history and treat its mysticism as the ancient Greek method of explaining historical events.

3 “Gong, Shang, Jiao, Zhi, and Yu” were the notes of the pentatonic scale in ancient Chinese music. They were similar to the notes of “Do, re, mi, sol, and la” in western music.

4 It is natural to associate each season with the direction from which the wind comes. Consequently, Autumn corresponds to the west wind.

5 Bamboo pitch pipes used in ancient Chinese music categorized sound into twelve semitones corresponding to the months of a year.