WE UNITE DUE TO the policy of privilege to the left liberal communities and LGBT organisations by the methods of ideological war carried out by the European Union and the new Seimas of the Republic of Lithuania, DUE TO encouraging aggressive propaganda of sexual minorities and legislation that discriminates against the majority of society, threatening the basic principles and values of social and national life, IN ORDER TO respond to the declaration issued by the European Parliament declaring the European Union an area of freedom for LGBTIQ individuals.

The laws and by-laws of the Republic of Lithuania do not prohibit or impede the rights of LGBTIQ persons throughout the European Union to live and publicly promote their sexual orientation and gender identity referred to in the aforesaid Declaration of the Parliament of the European Union. Indeed, the EP resolution and draft laws of the Seimas, under the guise of the concept of “language of hatred”, seek to legitimise universal control of ideas and ideological dictatorships of minorities, prohibit freedom of speech established in the Constitution of the Republic of Lithuania and introduce criminal liability abridging free expression.

The aforesaid Declaration and the legal acts and resolutions adopted by the European Parliament in this regard directly contradict the provisions of the Treaty of Accession of the Republic of Lithuania to the European Union, which stipulates that laws related to national history, traditions and family policy are the prerogative of Member States. The constant violation of the Accession Treaty and the introduction of the control of the constitutional rights of citizens pose a direct threat to the credibility and existence of the European Union and to the statehood of Lithuania.

Representatives of Lithuania in the European Parliament P. Auštrevičius, V. Blinkevičiūtė, R. Juknevičienė, A. Kubilius, A. Maldeikienė, J. Olekas voted for the Declaration violating the interests of the country. These are politicians who prejudice Lithuania, and their actions deserve to be distanced and condemned, naming them as representatives of non-Lithuanian citizens in the EU Parliament.

Such a situation is unacceptable to the citizens of the Republic of Lithuania, we are forced to defend ourselves and our state and the right of the society to traditional values. Based on the stated reasons and facts, the “Great Family Defence March 2021” organisational group announces the following declaration:

LITHUANIA WITHOUT GENDER AND LGBT IDEOLOGY 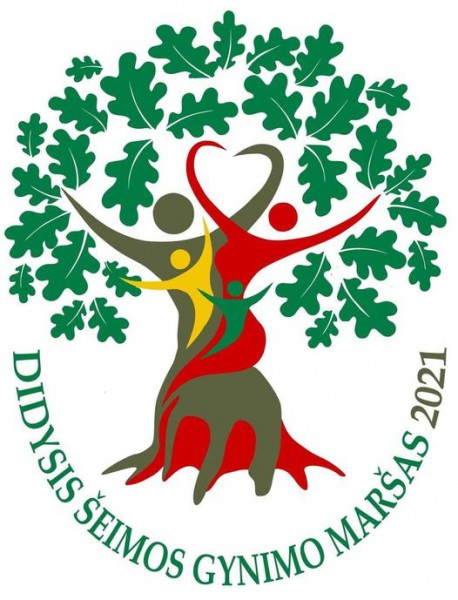 We will defend Lithuania from unconstitutional actions that violate the fundamental rights and freedoms of our society.

We will protect children, youth, families, and schools of our state from the indoctrination of sexual minorities, coercive attitudes that run counter to the constitutional concept of the family and natural values.

We will protect Lithuania from the recognition of pornography and the universal justification of abortion and sexual crimes, we will defend families from the dictates of minorities, which will inevitably lead to the constitutional crisis of marriage between a man and a woman, of a family being a state fundamental, we will stop ideological terror and child sexualization.

We will not allow extreme minority communities to forcibly inculcate the GENDER ideology, which is alien to our long-standing traditions and natural values, to the Christian morality based on the Decalogue and human dignity.

We seek to defend and will defend the right to raise children and youth in accordance with the convictions of the Parents.

Promoting homosexuality and transgenderism in schools at public expense by public authorities, LGBT communities and politically corrective officials. We consider this ideology harmful and dangerous not only for Lithuanian schools and families, but also for the whole space of public life and the future of our nation.
Early sexualization of children according to one-sided, World Health Organization (WHO) standards based on GENDER ideology. We will protect our children and ensure that parents and educators can responsibly communicate knowledge about love and the beauty of procreation.
Pressure from public authorities and foreign-funded organizations on the application of so-called cultural and political correctness in all areas of social, political and economic life. We will support teachers, civil servants, entrepreneurs, other professions fighting ideological pressure and gender propaganda.
Under the guise of human rights, tolerance, non-discrimination, the fight against violence and the prevention of so-called hate speech, programmes that abuse children, young people and adults are being inculcated by LGBT activists and are unacceptable to the general public.
Legitimation of GENDER ideology in the laws of the state, which would violate the fundamental constitutional rights of citizens and inevitably lead to the complete decline of moral norms and the destruction of the natural, healthy model of family, school and society, which threatens the existence of the state.
WE DECLARE:
Participants of the “Great Family Defence March 2021” with the public support will defend the constitutional principles, national and state traditions of the Republic of Lithuania based on the ideals of Christian values and freedom. We will do this with pride in our history, in the work of many generations of Lithuanian people, in creating a cultural and national identity and as a blood sacrifice in pursuit of Independence.

We ask the President of the Republic of Lithuania, the Constitutional Court, members of the Seimas, the Government, municipal councils, public organizations, business, and all Lithuanian citizens:

Resolutely defend the rights of Lithuanian families and the legal and social order established in the Constitution of the Republic of Lithuania. Start work to strengthen the protection of the family, consisting of Mother, Father, and a Child, and take immediate action to curb gender-based propaganda and any attempt to equate same-sex relations with the concept of the family enshrined in the Constitution.
Limit the influence of ideological organizations acting against national interests and implementing harmful solutions in Lithuanian education, media, and public life, which abuse children and youth.
Control the sources and methods of financing sexual minority organizations, to restrict their indoctrination of public and state life, which violates the constitutional rights of other groups in society.
Adopt provisions at state level to ensure the protection of society, parents and children from discriminatory sexuality education, the promotion of same-sex partnerships and the right of such couples to adopt children.
Resolutely implement the provisions of the Law on Strengthening the Family in all areas of life.
Eliminate any possibility of manipulating the “language of hatred” and the rights of minorities to introduce legal mechanisms of thought control and de facto dictatorship in the country, which threaten Lithuanian statehood and democracy.
.
Representative of the “Great Family Defence March 2021” organisational group Raimondas GRINEVIČIUS and organisational group.
This declaration will be adopted during the rally.

Organisations supporting this declaration are kindly requested to send a scanned document signed by the manager by email: infoautoridas@gmail.com