An expedition was carried out in Greenland this past July that, using technology developed by Latvian company SPH Engineering – a ground penetrating radar (GPR) and drone integrated system – managed to find a World War II aircraft abandoned “in the middle of nowhere”, buried under approximately 100 meters of ice.

On July 15, 1942 eight planes – six P-38 fighter planes and two B-17 bombers – left a U.S. Army base in Greenland. Due to adverse weather conditions, the squadron attempted emergency landing on a glacier far from populated areas. All the crewmen were rescued nine days later, but their planes, which were only lightly damaged during the landing, had to be left behind on the glacier. 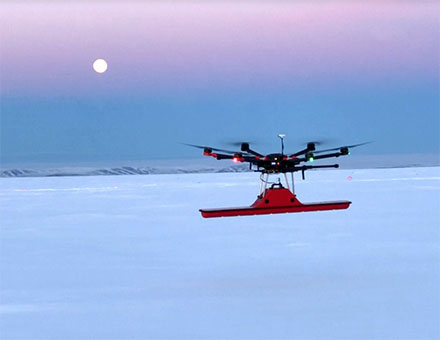 As time went by, the abandoned aircraft sank into the ice and could no longer be seen. An expedition in the 1990s managed to locate one of the planes – a P-38 fighter. The historic aircraft was brought to the surface and transported to the United States, where it was restored to its original glory.

More expeditions to Greenland followed to try to find the remaining Lost Squadron planes. The approximate location of one more P-38 fighter, Echo that was piloted by Robert Wilson in 1942, was established in 2011. Company SPH Engineering was involved in the project to make it easier for the expedition team to find aircraft, and the company’s engineers integrated a GPR and a drone into a single system, which enabled fully automated surveillance of the glacier and precise location determination even in areas inaccessible or difficult to access for humans.

SPH Engineering’s technology was tested several times before the Greenland expedition, but it was only during the search for the plane that the system could be tested in real-life conditions. The expedition team split up into two groups. The first commenced the search for the plane using the integrated GPR-drone system. Data from the system indicated that there was an object buried under more than 90 meters of ice. The other group, which used a GPR antenna mounted on a sled, produced very similar results. The distance between determined locations was just three meters. Based on the data of both groups, a location for the drilling was calculated. It was clear the expedition was a success when a red, oily fluid was extracted from a depth of 104 meters that was identified as 5606 hydraulic fluid used in U.S. aviation. The samples of the fluid are yet to undergo detailed chemical analysis.

The expedition has proved that the GPR-drone integrated system developed by SPH Engineering is efficient at locating objects deep under the ice, and data obtained even in unfavorable weather conditions are precise enough for the purposes of such missions. The GPR-drone integrated system saves time and human effort, and can be used in unsafe locations. For instance, the Greenland expedition’s group that used a GPR mounted on a sled had to be at least three-strong – one expedition member was spearheading the group to check the safety of the ice, one was pulling the sled, and one was moving the receiver. In the meantime, the GPR-drone integrated system was collecting data fully automatically, while the flight and radar status was monitored using ground control software UgCS.

Taking into account the successful performance of SPH Engineering technology, it could also be used during the next expeditions to more dangerous places in Greenland, where several more World War II aircraft are buried under the ice. 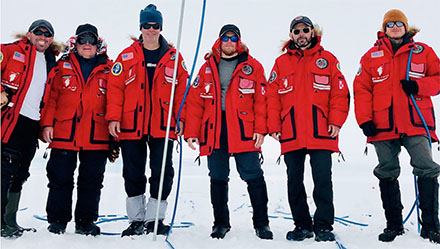 The last Greenland expedition was led by Jim Salazar and Ken McBride from the U.S. non-profit organization Arctic Hot Point Solutions and Fallen American MIA Repatriation Foundation (FAMIARF). The other members of the expedition were Jānis Ķuze and Alexey Dobrovolskiy from the Latvian company SPH Engineering, and Mario Carnevale and Myles Danforth from the U.S. company Hager GeoScience.