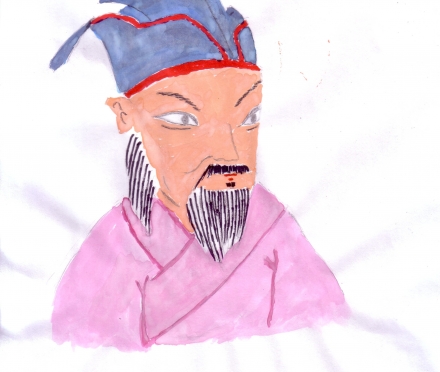 It is not difficult to find talented people, but it is difficult for talented people to make good use of their talents. It is lamentable that Yi Jia had the ability to assist an emperor, but was ultimately unable to do so, because he lacked patience and hope. If one aims high, he must have great expectations. If one wants to accomplish great achievements, he must be patient. In ancient times, there were many scholars with great talents. However, in the end many of their talents were left unused. This might not be entirely the fault of their emperors. Perhaps the fault was their own.

After reading Jia’s political ideals, I found that even China’s best dynasties left Jia’s political standards unmatched. Although he had a great emperor, Wen-di, Jia died without realizing his political dreams. Does this mean that only if one meets the greatest emperors like Yao and Shun, will one be able to utilize one’s talent to contribute anything to one’s country? Confucius tried to persuade every king in China to use him. He desired to assist any king except the worst tyrant so that he might realize his political dreams. Before Confucius went to see the King of the State of Chu, he sent You Ran 2 there to prepare his visit. After the interview, he asked Zi-xia 3 to follow up on the possibility of employment. Confucius tried very hard to gain the king’s recognition. After Mencius 4 decided to leave the State of Qi, he still stayed at Zhou City 5 for three more days and said to himself, “The King of Qi might employ me.” Mencius had such great expectations that he could not bear to abandon his king immediately. Chou Gong-sun 6 asked Mencius, “Why are you not happy?” Mencius replied, “Except me, who can save China? Why should I be unhappy simply because I cannot meet a wise king?” This showed how highly Mencius regarded himself. If the king would still not utilize his talent even after Mencius was try so hard to persuade him, then Mencius would not feel regret leaving Qi because he realized that the country was too corrupt to be saved. For Yi Jia, it was not that Emperor Wen-di failed to use his talent 7, but rather that Jia himself failed to allow his talent to be used by Emperor Wen-di. General Ying Guan 8 led an army of 300,000 soldiers to defeat powerful Queen LÃ¼. General Bo Zhou 9 himself presented the Imperial Seal to Emperor Wen-di. In addition, Guan and Zhou were also the old generals of Emperor Gao-zu. Even the closeness of a father-and-son relationship paled in comparison to the relationship between Emperor Wen-di and the two generals.

Thus it was difficult for Emperor Wen-di to discard all the old officials within one day and appoint Jia, a teenager from Lo-yang City, as Advisor. If Jia had been patient and had tried to befriend Generals Zhou and Guan to gain their trust, then he could have realized his political dreams within ten years. Who could have anticipated that Jia would suffer depression and die young, causing people to lament his unrealized ambition? When Jia crossed the Xiang River, he wrote a poem mourning Yuan Qu 10. After reading Jia’s poem, I had the impression that he was so melancholic, fretful, and upset that he desired to remove himself from bureaucratic politics. Later, due to his melancholy and self-pity, he died very young. In my opinion, Jia was not able to deal with difficulties. The fact that his political plan was not adopted on one occasion did not mean that his government would never adopt it. Jia should have patiently waited for change. Who could have anticipated that he would destroy himself because the government rejected his plan at that time? Alas! Jia was ambitious but impatient. He had distinguished talents, but lacked long-term vision.

In ancient times, the one with distinguished talents often had difficulty fitting the expectations of the time. Unless he met a wise king, his talents could not be fully utilized. King Jian Fu met Meng Wang in a thatched cottage. After a pleasant talk, King Jian Fu disregarded the opinions of his old officials and promoted Wang to be his prime minister. Although King Jian Fu was not as educated, nevertheless, he did one time acquire half of China. Perhaps this was simply because he recognized Wang’s talent and used him.

I mourn deeply for Jia’s unrealized ambition, so I criticize him in full. I wish that an emperor who acquires talented officials like Jia could understand that they are often timid and steadfast. Once their ideas are rejected, they may become sadly grieved and dispirited. They may never be able to recover. A talented scholar like Jia should cautiously control his emotions in hopes that his dream will be realized.

1 Shi and Zi-zhan were Dong-po Su’s other first names. He was a native of Mei-shan City (present day Mei-shan-xian City in Sichuan Province). He, his father, Xun Su, and his younger brother, Che Su, were all famous essayists. Today people call them the “Three Su’s”. Their essays are outstanding and especially excel in argumentative writing. There was a Chinese saying, “If one masters the essays of the Three Su’s, one eats mutton. Otherwise, one eats the roots of greens.” The saying showed that their argumentative writings were considered model essays for those who tried to prepare for the Advanced Exam. The Three Su’s are included in the “Eight Masters of Ancient Chinese Prose”. Dong-po Su was very learned and talented. In 1057 CE, he and his younger brother took the Palace Exam at the Board of Rites. Xiu Ou-yang, the examiner, placed him in second place. At that time Dong-po Su was only twenty-two years old. He wrote the essay “When Punishing or Awarding People, We Must Be Kind and Sincere” as his paper when taking the Palace Exam. Xiu Ou-yang asked Dong-po Su, “In your essay, Gao-tao said three times, â€˜Kill him.’ Emperor Yao said three times, â€˜Pardon him.’ Where does this story come from?” Su replied, “I thought it must have been so.” Ou-yang praised Dong-po Su highly and said to himself, “I should keep this man out of the limelight.” This statement showed Ou-yang’s concern for nurturing young talent. Later, Dong-po Su was appointed to be the judge of Feng-xiang-fu City and then an Editor of Historical Records.

During the Xi-ning Period An-shi Wang, the prime minister, established new law codes. Dong-po Su sent the emperor a letter to oppose the reform. Consequently, Su was banished from the emperor’s court and transferred to the position of Judge of Hang-zhou City. Later, he was demoted to Deputy Commissioner of Militia at Huang-zhou City. During the Yuan-you Period Su became a member of the Royal Academy and then a imperial tutor. In 1094 CE, he was demoted to Deputy Commander at Qiong-zhou City. In 1099 CE, he was pardoned and moved north. In 1101 CE, he died at Chang-zhou City. See the biography of Dong-po Su in Chapter 338 of The History of the Song Dynasty.

In a letter to Assistant Judge Min-shi Xie, Dong-po Su wrote about the profundity of writing. He said, “Writing is like clouds drifting or water flowing. At first, it does not have any direction. However, it goes where it is supposed to and stops where it should. In other words, the development of an essay should be natural; a good essay is like a graceful woman whose bearing is full of charm.” Dong-po Su commented on his own writing, “My essays stem from tremendous resources. They run like a spring which may emerge anywhere from the ground.” Su truly understood the profundity of essay writing. He was not only a great essayist, but also a great poet. In addition, Dong-po Su was a man greatly accomplished at practicing calligraphy, playing the game, “Go”, appreciating wine, and studying Buddhism. It can be said that he was a man of many talents.

2 Zi-you was You Ran’s other first name. He was a native of the State of Lu and a disciple of Confucius.

3 Zi-xia was Shang Pu’s other first name. He was a disciple of Confucius.

4 Mencius was a student of one of Confucius’ scholars. He is considered the second most important scholar after Confucius in China.

5 Zhou City was a town in the State of Qi. It is now called Lin-zi-xian City which is located in Shandong Province.

6 Chou Gong-sun, a native of the State of Qi, was a disciple of Mencius.

7 Yi Jia had mastered all schools of Chinese philosophy by the time he was eighteen. He advocated reassigning New Year’s Day when a new emperor assumed the throne, assigning colors to officials’ uniforms based on rank, establishing law codes, and promoting rites and music. Emperor Wen-di offered Jia the academic position as Great Scholar and intended to appoint him to be Advisor. However, powerful generals, Bo Zhou and Ying Guan, opposed the appointment because they did not trust Jia and they thought he was too young. Consequently, Jia was banished from the emperor’s court and became the tutor of the King of Chang-sha. When he crossed the Xiang River, he wrote a poem to mourn Yuan Qu’s death. The poem showed his self-pity by comparing Yuan Qu to himself. Soon after he was transferred and became the tutor of King Liang-huai. He assisted the King in state affairs. His achievement was appreciated. Later, King Liang-huai fell from a horse and died. Yi Jia lamented that he failed to prevent the accident. After a little more than a year, Jia also died. He was only thirty-three years old.

8 General Ying Guan and General Bo Zhou crushed the force of Queen LÃ¼ and established Wen-di as the Emperor of the Han dynasty. Ying Guan was made Ying-yin Duke.

10 Yuan Qu is the Father of Chinese Poetry. Ping and Ling-jun were his other first names. He was a member of the royal family of the State of Chu during the Warring State Period. He was one of King Huai’s advisors and was slandered by his colleague, Shang Jin. Consequently, Yuan Qu was exiled first to the area north of the Han River, then to the area south of the Xiang River. He committed suicide at last by drowning himself in the Mi-lo River.