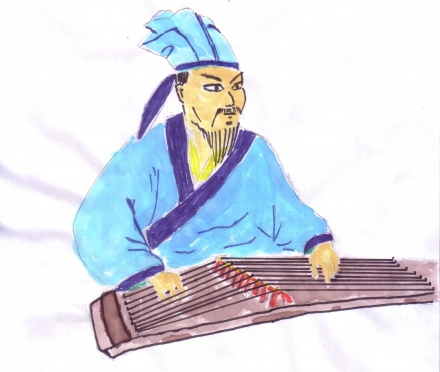 I suffered from depression in the past. Even though I resigned my position and stayed home to rest, I still could not recover from the disorder. Later, I studied zither with my friend Dao-zi Sun and learned a few melodies of the “Gong” tune 2. Gradually, I began to enjoy playing the zither and became unaware of my melancholy.

The artistry of playing the zither is simplistic. However, only after you learn to play it well can the bass become the “Gong” tune and the soprano become the “Yu” tune 3. Suppose one tunes the strings and starts playing. One may change the tone and tempo suddenly. The urgency of a fast tempo makes one feel anxious. The harmony of a slow tempo makes one feel peaceful. The fast music may sound like rocks falling from a collapsing cliff, a river cascading down a mountain, or wind and rain arriving in the evening. The slow music may sound like the sigh of a widow or a widower, or the song that male and female birds sing to each other in harmony. The vision and ancient wisdom conjured by music resemble the legacy bequeathed by Emperor Shun 4, Emperor Wen-wang 5, and Confucius 6. The bitter grief with subsequent indignation conjured by music resembles the lament of the rejected such as Bo-qi 7 or Yuan Qu, a loyal minister, who was not trusted by his king.

Happiness, anger, sorrow and joy affect one’s heart deeply. The sound of the zither is pure, simple and peaceful. It has the same lively and graceful tone as those books written during “the reigns of Emperors Yao and Shun” or during the Three Dynasties 8, as Confucius’ essays, as the suffering of the author of The Book of Changes, as well as the lament and satire of The Book of Poetry. Furthermore, the harmony drawn from the zither music which can be heard by ears and played by hands may help release one’s sorrow and untie the knot in one’s heart. Thus, in addition to affecting one’s feelings, a zither may help one attain peace and happiness.

My friend Mr. Yang loves to study and writes well. He wishes he could realize his ambition, but he failed the Advanced Exam many times. After being transferred from his inherited title to lieutenant in a small town located several thousand miles southeast of here, he surely felt that he had been treated unfairly. For him, there are several disadvantages to live in the south. First, because he was often sick during his childhood, the lack of medical supplies in the south does not bode well for his future health. Furthermore, the customs and food are completely different there; the adjustment to these changes can be difficult. With a sickly body and a sense of frustration facing unsuitable customs, would he be able to survive if he remained in a state of melancholy for long? In my opinion, playing the zither may help him balance his heart and recover from his sickness. Therefore, I am writing this essay about the zither to wish him well on his journey to his new position. Dao-zi and I plan to serve wine and present a zither to him as our parting gift.

1 Yong-shu was Xiu Ou-yang’s other first name. In his late years, he called himself Liu-yi-ju-shi (a sixty-one year old Buddhist scholar). He was a native of Lu-ling City in Ji-zhou County (which is either present day Ji-an-xian City or Yong-feng-xian City of Jiang-xi Province). When Xiu Ou-yang was four, his father died. His family was poor and could not afford to purchase writing brushes and paper. His mother taught him by writing words on the ground with a tree branch. In 1030 CE, Ou-yang passed the Advanced Exam at the age of 24. In 1041 CE, he became an advisor and then drafted the emperor’s edicts. At that time Yan Du, Qi Han, and Zhong-yan Fan resigned their positions as prime minister one after another. He told Emperor Ren-zong that he should have retained these great prime ministers. His words offended the emperor. Consequently, he was demoted to Mayor of Chu-zhou City (present day Chu-xian City of Anhui Province). While he was in Chu-zhou City, he called himself “Old Drunkard”. Later, he was transferred to Mayor of Yang-zhou City and then Ying-zhou City. Afterwards, he was reinstated as the member of the Royal Academy. He was appointed by Emperor Ren-zong to revise The History of the Tang Dynasty. In 1060 CE, he became the Vice President of the Privy Council. In 1061 CE, he worked closely with Prime Minister Qi Han to administer state affairs. During the early years of Emperor Shen-zong’s reign, he was demoted to Mayor of Bo-zhou City. Later, he was transferred to Mayor of Qing-zhou City and then Cai-zhou City. When he was the imperial tutor of the crown prince, he recruited talented scholars. He retired at Ying-zhou City. After he died, the emperor honored him by giving him the posthumous name “Wen-zhong” (Duke of Loyalty and Literature). In his early years, he loved to read Yu Han’s essays. After taking pains to explore them thoroughly, he promoted ancient Chinese literary essays. His campaign for Chinese classics served to demonstrate principles that could be put into practice. All the Chinese scholars became his followers. Whenever he finished writing an essay, he would revise it many times. China’s great writers that came after him like Gong Zeng, An-Shi Wang, Dong-po Su and Che Su were all his students. It is difficult to write great essays and it is even more difficult to produce a group of great writers. Here is one story about Ou-yang: When Dong-po Su took the Advanced Exam, Ou-yang was the examiner. In this exam, Su’s score was the highest, but Ou-yang put him in the second place and put Gong Zeng in the first place. Ou-yang said, “Su is only twenty-two years old. If I put him in the first place, he might become proud.” It turned out that Su became the greatest and the most prolific writer during this period of China’s Renaissance.

2 “Gong, Shang, Jiao, Zhi, and Yu” were the notes of the pentatonic scale in ancient Chinese music. They were similar to the notes of “Do, re, mi, sol, and la” in western music.

3 This sentence means “only after you play it well can its music and your feelings become one.”

4 Emperor Shun played a pentachord to sing of the south wind.

6 After Confucius left the state of Lu, he composed several melodies including the one for “Turtle Mountain”.

7 Bo-qi lived during the Zhou dynasty. He was Ji-fu Yin’s son. His mother died. His father listened to his step-mother’s words and banished him in anger. Later, his father regretted his action and searched for him in the countryside.

8 “The Three Dynasties” refers to the Xia, Shang, and Zhou dynasties.