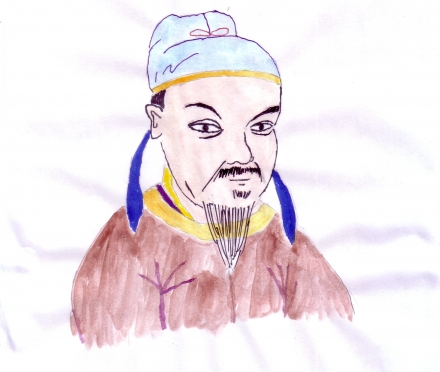 If we were to build craggy mountains, deep pools, and deep valleys on a city’s outskirts, we would have to exhaust ourselves in dredging channels, moving boulders, and ascending to dangerous heights through difficulties. Furthermore, even if we were able to do so, it would still be impossible to make it look natural. However, there is one exception – Yong-zhou City. If we match its terrain and preserve its natural beauty, we can easily build such a dream park without exposing people to danger or exhaustion.

Yong-zhou City is actually at the foot of Jiu-yi Mountain 3. The city’s first land surveyor built a town surrounded by the mountain. At that time stones were buried in clusters of grass and springs flowed underground. This was a place where vipers hid and where foxes and squirrels roamed. Luxuriant trees, beautiful flowers, and poisonous grass mingled and competed for space. Because no one tended this place, it was called a wasteland.

One month after Wei assumed his office as mayor at Yong-zhou City, everything was being managed properly. There was not much left for him to do. One day he looked over the land and found it extraordinary. Consequently, he ordered people to cut weeds and open a path. The cut weeds were piled up onto a hill and then burned. He also ordered channels dredged and water sieved so that a clear stream might flow. Consequently, new wonderful terrains continued to emerge. The stagnant filthy water became clear and the wasteland became a beautiful park. If you looked at the plants, they appeared pretty, delicate, and vigorous. If you looked at the water in the dam, it appeared full, wide, and winding. Peculiar pieces of stone rose in ranks around the park. Some of them were set in order; others looked like people kneeling. Some of them stood tall; others were lying flat on the ground. The paths in the mountain caves were winding and deep. The piled rocks protruded from the ground menacingly. Because of these interesting features, Mayor Wei decided to build a tower for sightseeing. Everything displayed in the park either matched or complemented its background, and showed its craftsmanship like an entertainer performing on a stage. The remote plateaus joining to mountains alternated in the landscape with the cliffs at the wooded foothills. The plateaus and the cliffs were sometimes hidden and other times visible. The nearby scenery, surrounded by the verdant grass, and the distant scenery, tinted azure by the sky, both met the eyes of an observer in the tower.

Later, Mayor Wei invited guests to the tower and entertained them at a banquet to celebrate its opening. A guest praised and congratulated the mayor on the tower’s completion by saying, “Your building of this tower inspires us to see your vision. You revealed the beauty by matching its terrain. You must have sought to educate people by acting according to local customs. You hoed weeds so that flowers could grow freely. You must have wanted to eliminate criminals and protect good citizens. You removed silt from the channels so that a clear stream could flow. You must have been determined to demolish greed and establish a clean city government. You climbed the tower to look into the distance. You must have hoped to have every family provided for and educated.” If what this guest said was true, then this tower was not just a place to enjoy viewing trees, stones and streams, or merely a window to the beautiful scenery of plateaus and wooded foothills. Mayor Wei built this tower mainly because he wanted future mayors to think about more important tasks by observing small things. I proposed to have this story of Mayor Wei’s inscribed on the wall as a model for future mayors.

2 Zi-hou was Zong-yuan Liu’s alternative first name. His ancestral home was in Xie-xian City (in present day Shanxi Province) of He-dong County. He was born in Chang-an, the capital of the Tang dynasty. His father, Qing, was the Assistant Censor. When Zong-yuan was four, his mother, Lu, taught him poetry. When he was twenty-one, he passed the Advanced Exam and then became a Great Scholar at the Royal Academy. Liu mastered Chinese classics and history. His opinions were majestic and outstanding. He was appointed to Editor of the Ji-xian (elites) Palace. Later, he was transferred to Lieutenant in Lan-tian City. In 803 CE, he was promoted to Censor. In 805 CE, Shu-wen Wang and Zhi-yi Wei assumed power. In order to reduce the influence of eunuchs and reform politics, they employed talented people by bypassing the conventional rules. Liu was appointed to Counsel on the Board of Rites. A few months later, Emperor Shun-zong was struck down with an illness. He abdicated the throne to Xian-zong. The political climate changed drastically. Wang and Wei lost power in the political struggle. In September of that year, Liu was demoted to Mayor of Shao-zhou City as a result of his association with Wang and Wei. On the way to Shao-zhou City, Liu was demoted again to Si-ma (a position in charge of the city’s military affairs) in Yong-zhou City. Yong-zhou City is now called Ling-ling City and is located in Hunan Province. At Liu’s time Yong-zhou City was bleak and desolate. He did not have many things to do, so he toured all over the countryside and made many travel notes. In Winter 814 CE, he was summoned back to the capital. In Spring of the next year, Liu was transferred to Mayor of Liu-zhou City (present day Liu-cheng-xian City in Guangxi Province), a more remote and primitive region. Even so, Liu still devoted himself to the city government and accomplished meritorious services. The people in Liu-zhou City built a temple in Lo-chi (east of Ma-ping-xian City in Guangxi Province) to honor him. Yu Han wrote an inscription about him on the tablet of the temple.