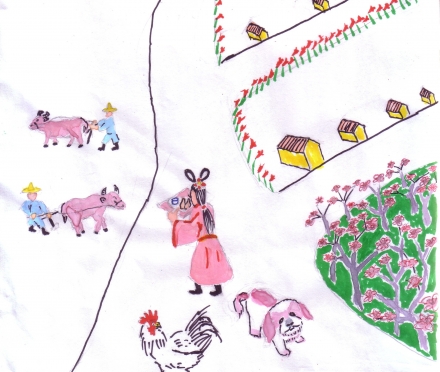 In the Jin dynasty, a fisherman from Wu-ling City rowed his boat along a creek. He forgot how far he had traveled. Suddenly he encountered a grove of blooming peach trees. As far as he could see, there was nothing but peach trees. The grass on the banks was fresh, pretty, and fragrant. Fallen flower petals drifted like confetti. The beautiful scene amazed the fisherman. He continued rowing, looking for what lay beyond the grove. When the grove ended, he found the source of the creek at a mountain. The mountain had a cave with a small entrance. Thinking that he saw lights inside, he left his boat and entered the cave.

The first part of the cave was so narrow that only one person could pass. After he walked another fifty feet, an expansive paradise suddenly appeared. The land was vast and the houses were orderly. There were fertile fields, a beautiful pond, and plants such as bamboo and mulberry trees. The paths in the village were well connected for easy travel. As he approached the village, he heard dogs bark and roosters crow. People were coming and going, busy with farm life. They were dressed in the same way as the people outside the cave. Both old and young lived happily there. When they saw the fisherman, they were amazed. They asked him where he had come from. The fisherman answered all their questions. Then they invited him home for dinner. They prepared wine and killed chickens for him. When the villagers heard of him, they all came to visit. They claimed that they had come here a long time ago to escape the tyranny of the Qin dynasty 1, and that after their families and neighbors settled down here, they never left. Consequently, they had lost touch with the outside world. They did not even know of the Han dynasty 2, not to mention the Wei and Jin dynasties 3. When they asked the fisherman what year it was, he responded in great detail. After listening to his description, the villagers sighed over the problems outside. During his stay, the fisherman enjoyed delicious food and kind hospitality. After a week, he wanted to go home. When he was leaving, the villagers said, “Please do not tell anyone about this place.”

After he found his boat and started his return journey, he carefully placed many trail markers along the way. As soon as he arrived at the city, he reported to the mayor about what he had seen. The mayor sent people to search for the village immediately. They followed the fisherman’s markers, but soon got lost. Later, a gentleman, Zi-ji Liu 4 of Nan-yang City 5, heard the story and eagerly planned to go there. His search also failed and soon he died from a disease. After that, no one would ask for the directions.

4 Lin-zhi was Zi-ji Liu’s alternative first name. He loved to travel in the countryside.

5 Nan-yang City is now called Nan-yang-xian City and is located in Henan Province.